Homepage > Something About Us by Riley Hart

Something About Us by Riley Hart

Falling in love was the easy part.

It isn’t as easy as they thought.

Away from home for the first time and feeling like he has to compete with Saint’s experienced and cultured friends, Lucky is a fish out of water. Saint is still coming to grips with his recent loss while doing everything he can to keep Lucky happy. The only time things feel right is when they lock themselves away from the world—when they’re alone, everything is perfect.

But reality comes crashing back in to challenge them at every turn. Lucky and Saint need to learn how to stand together, as well as apart, if they’re to have any hope of making this last. They’re learning the hard way that “I love you” is when the real work begins. 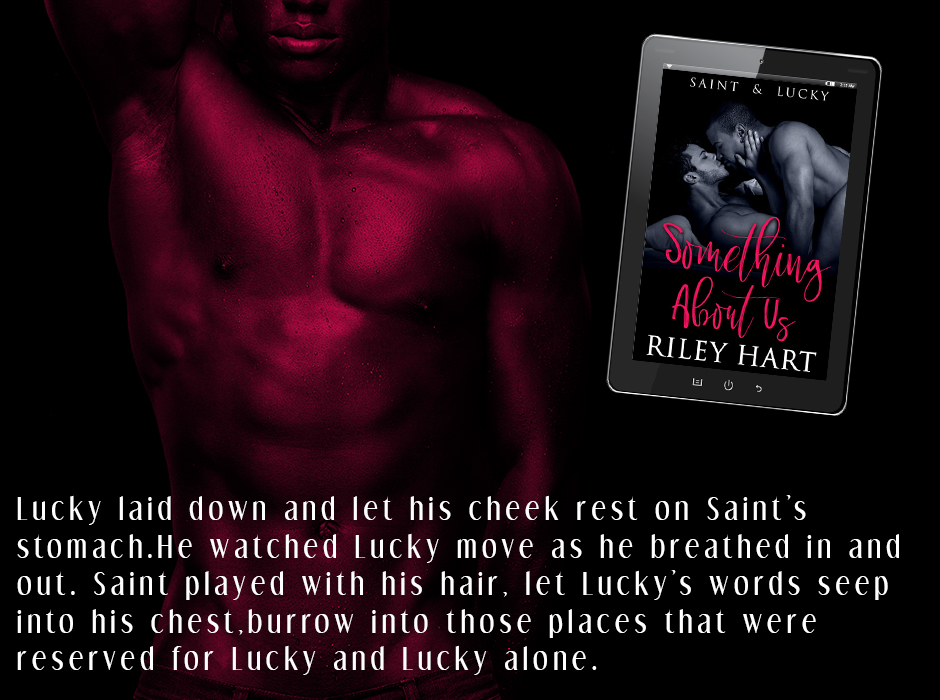 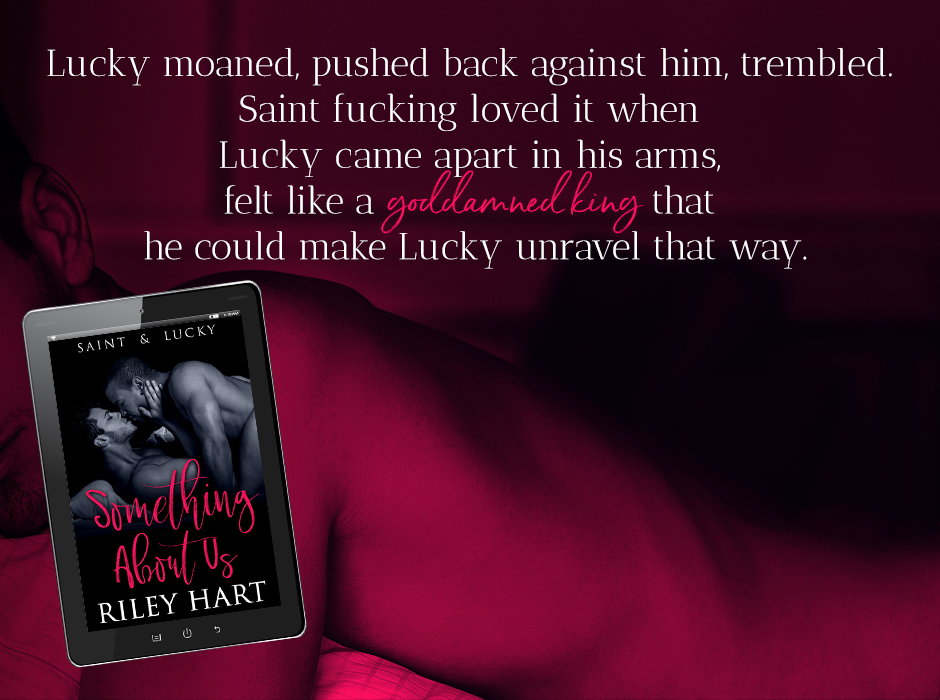 Lucky Holloway had never seen so many cars in his life.

Okay, so maybe he was exaggerating a bit. It wasn’t as if back home he’d never driven into DC. Obviously, he had, but that was different. DC wasn’t something he did on a daily basis. Since he’d just moved to Los Angeles with his boyfriend, Saint, this—the mass amounts of traffic—would be his life. Every day. He figured he’d better get used to it.

Lucky watched the obscene number of cars, thinking about how many people were there. Again, he glanced at his boyfriend—his boyfriend. It was still an adjustment to realize he had a boyfriend and that moving to LA was a part of it. He would take hours in traffic if it meant having Saint, if it meant stepping outside of the world he’d always known and seeing what else was out there.

There was a loud honk, and Saint cursed and zipped between two vehicles, changing lanes into a spot where his car technically shouldn’t have fit.

“You gotta be a little aggressive to get your way.”He winked, and Lucky playfully rolled his eyes.

“Yeah, this is going to take some getting used to. It’s so amazing to me that there can be this many people right here on this freeway with us, when there are fifty other freeways with likely the same amount of people on them.”

“It’s wild when you think about it in those terms. For me, it’s life. I don’t really know any different.”Saint continued to push his way into spaces, making other cars slow down to let him in, until he exited the freeway. Lucky still couldn’t believe he was there, that he’d met Saint only a few months ago. That somehow, in the course of Saint going to Lucky’s hometown of Cottage Grove, Virginia, to reconnect with an estranged grandmother, Saint and he had fallen in love. And how so soon after Saint had become a part of his grandmother, Alice’s, life, and in turn Lucky’s life, Alice had passed away. He was angry on Saint’s behalf. It wasn’t fair that Saint had lost her so soon after finding her. It wasn’t something Saint mentioned, not outside of that moment they’d shared in Saint’s grandfather’s old office. Saint kept himself zipped tight, as though he hadn’t lost Alice and this was all about their adventure. Lucky decided to make a point of trying to get him to talk about it more.

What he really couldn’t believe was that he’d made the decision to uproot his whole life, leave behind everything he knew, and go with Saint. He’d never done something so uncharacteristic in his life—falling in love in such a short amount of time—and it was both thrilling and scary as fuck.

Riley Hart is the girl who wears her heart on her sleeve. She’s a hopeless romantic, a lover of sexy stories, passionate men, and writing about all the trouble they can get into together.

She loves reading, flawed characters, and hanging out with her husband and children, who she adores. She and her family live in Southern California, soaking up the sunshine while also missing seasons. Not a day goes by that she isn’t thankful she gets to wake up and do what she loves.