OWNED (Ripples in the Status Quo #4 ) by R PHOENIX 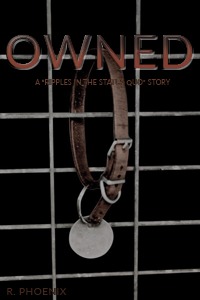 So we start book four, just after Khaz has drained Noah in an attempt to save him from being sold.

Although we know Noah hates fangers, the two men had gradually come together and sought comfort and neither wanted to let the other one go.

Little did he know that Elias Ivers was the intended new owner.

Elias was a witch and had already got himself a hoarde of purchases, Jace from book one among them.

He was his most prized possession, but he longed for Noah, a slave from the rebellion.

At this point in time Noah is still very dead though and Khaz doesn't know if the blood they shared will have been enough....

When Noah finally awakens to his new life, he remembers nothing of his old one, only Khaz seems familiar.

They settle in to a very hot relationship but soon enough, trouble comes calling.

After a tense meeting, Khaz has agreed to take Noah along for one evening with the Witch and his puppy, only then will they be free to love one another in peace.

As you can imagine though things don't exactly go to plan and both vampires are subjected their own personal forms of torture.

Will they make it out of the evening intact and what will the future hold for them both.

This was a very powerful and emotional fourth book in the series.

It is starting to bring all the players together and the results are getting interesting.

It's a beautifully dark series in which all forms of supernatural beings are superior to humans.