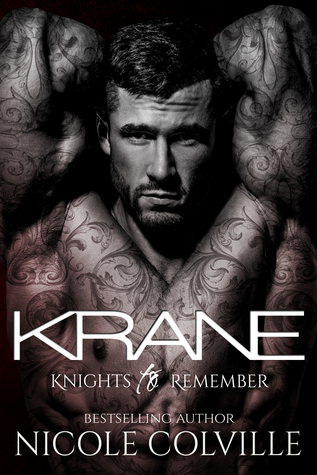 Now where do we start with this man???

Just how perfect he is? How strong, handsome and all powerful he is...

Yet again Nicole Colville has provided us with a droolworthy character that will keep you up all night wishing he was yours.

Krane has been in a sham of a marriage for 20 years.

When after years of cheating she finally catches him, the first time he has ever gone behind her back, all gloves are off.

It's a divorce thats going to get nasty.

She gives away his dogs, takes a full page ad out in the local paper announcing his love of men and basically tries to ruin his life.

What she didn't count on was it being the freedom he needed to finally find a future.

Going to visit his brother in London to get away from it all he ventures to the club where his brother is a dom.

He never counted on falling for the most sought after, beautiful sub in the place.

Bailey has been alone for years, playing occasionally but only really going to the club to feel close to his Master who had died.

When he encounters Krane however, things are going to change whether he wants it or not.

All they need to sort out is the insane jealousy on Krane's part and the need Bailey still feels to be dominated.

How will they fit in to each other's lives, will they be able to find a balance that suits both their needs.

If you want a book where you can literally feel the power of the man coming off the page, this is it!!

Add in 2 of the most fluffy, mad bundles of fur, a family that is about as in your face as they can be, an insatiable need to show of his manhood at any given time and a little problem with your brother having had your boyfriend first and it's just a fantastic read.