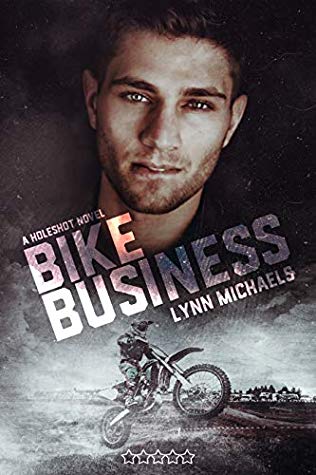 I was sent his book to review. It’s not normally a genre I’d read as I’m not a big fan of Supercross, however, the blurb looked interesting and I’m always keen to expand my reading.

Johnny works for Apex Racing as their accountant but is becoming more disillusioned as the days goes on. He’s lamenting that his best friend and major crush, Pilot, has got himself not one, but two new boyfriends, leaving Johnny pretty heartbroken from unrequited love. Gavin appears looking to sign a new racer for his team, but is smitten with the nerdy finance guy and much of the story is his pursuit of Johnny while trying to prove he isn’t just in it to sign a racer, Bryce, that  Johnny is close to. With every forward step to their relationship comes a blow backwards and it seems like they might not ever resolve the issues that come with a long distance relationship. There is also Johnny’s huge lack of confidence to consider. Gavin is far more dominant although not actually a dom. Their sexual chemistry is what saves them and drives them to make a go of it.

I found the subject matter quite interesting, however, I wasn’t a hundred per cent smitten with the characters. I felt that Johnny’s character was a bit too indecisive and his to and fro attitude towards Gavin left me frustrated at times. I thought Gavin’s character was overly expansive with too many new aspects of his personality coming in to play each time he’s the focus. That being said, the long distance relationship and the supporting characters went a long way to keeping my interest. I was rooting for their HEA which kept me engaged sufficiently to see it through to the end.

If you’ve read the other books in the Holeshot series, you will enjoy this one because of the familiar characters. Overall, this was fairly engaging and interesting enough. Not my favourite book in the series, but I am glad I read it.