The Vampire and The P.I. by J.P BOWIE 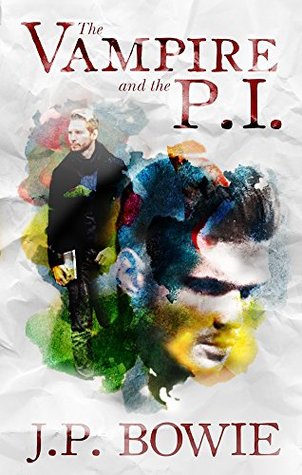 Sean Martin had been a cop, injured in the line of duty he had retired and become a P.I.

Business isn't going to well due to an ex colleague with a vendetta.

He was set up and blamed for raping an underage boy.

Clients and old friends dropped away and he was left feeling like this was not going to work.

That is until a handsome vampire came calling with a case for him.

Rafael Barrantes wants to know what happened to his human companion, although the police ruled it as a suicide, he knows better and wants Sean to take the case.

While at Rafael's he meets his assistant Arturo and there is an instant attraction.

The only thing is, Sean never wanted to get into it with a vampire.

Arturo however has other ideas and pursues Sean which results in some seriously hot sex.

Sean actually thinks that vampires must have magic saliva because the blow jobs are so damned good!!!!

As he gets further in to the case, his relationship starts to get more full on, with Arturo wanting him to be his lover for life.

The web of lies and corruption that is uncovered leaves Sean wondering just who is the good and the bad in all this.

With Rafael and Arturo's help he finds out who killed Julian and some deeply buried scandals are revealed.

Will Sean finally be cleared and free to go back to a normal life? Will Arturo finally get to taste his blood and become his mate for life?

I haven't read any paranormal books for a while and was pleasantly suprised by how good this was and it left me wanting more.

This book was well written and you instantly loved the two main characters and wanted a HEA for them.