Ryker and Gavin by A.D. Ellis 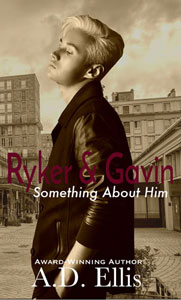 So we are at number 5 in the series and it shows no sign of slowing down, they just keep getting better.

In this one we meet Ryker, aged 23 he has lived away from home for 5 years since he came out.

Although seeming ok with it all he just didn't see his mum fully getting the gay thing and thought it was best if he left home.

Meeting his best friend Asher was something he would always cherish and at 23 he was doing a job he loved and living life.

Hooking up with guys he met online seemed like fun until one night he wanted more.

Gavin loved his life, even thought he was a bit lonely. He shared most of his downtime with his friend Annabeth and they were quite happy with it until one night at the theatre when she realised it was her estranged son on the stage.

Things become slightly awkward when he realises that this was the young man who threw him out after an amazing time.

For years he had tried to help his friend get over the pain she felt at kicking her son out, how would she feel if she found out he wanted more from him than she did?

Ryker's mum couldn't accept the fact he was gay, how would she feel if she found out he liked her best friend.

The push and pull, twists and turns in this story make for a fantastic read and I can't wait to see what comes next in the series.