Between These Sheets by Devon McCormack 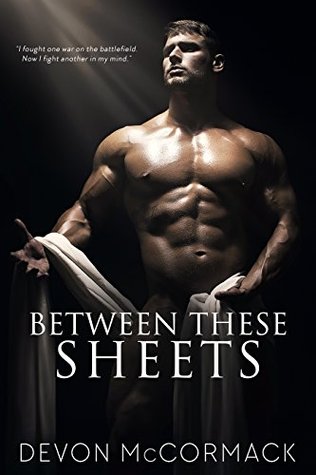 Between These Sheets by Devon McCormack – 5 stars

I read this book with my heart in my mouth and the sting of tears behind my eyes all the way through.

Jay is a drifter with a huge chip on his shoulder seemingly a trouble maker with a bad temper. At the warehouse where he works he is always getting in trouble and is surprised his boss Reese hasn’t gotten rid of him. But Reese is battling his own demons and when Jay witnesses one of Reese’s PTSD episodes it brings them together and a friendship forges. Once they start to see a bit more of each other especially out of work, their incredible sexual chemistry gets the better of them and they embark on an explosive sexual exploration. Inevitably this grows into something more but this isn’t the sole focus of the book. Jay is beleaguered by memories of his cruel father and the death of his older brother which leads to his aggressive outbursts. Reese is practically crippled by his PTSD from being in Iraq and struggles with it every day even 10 years on. Somehow though, Jay is able to help Reese find some calm in the storm of his life and together they start to build a new existence which more than just getting through the day.

There are many challenges for this couple both physical, mental and emotional and Devon McCormack explores all of them with sensitivity and respect. The descriptions are so vivid and when Reese has an attack I found myself holding my breath until he was ok again. It was a raw depiction of how hard it can be when the burden of memories becomes more real than your actuality reality. Both Reese and Jay are affected by this and it is a testament to the strength of their characters as to how they deal with it.

The sex as always with Devon’s books is off the scale hot, but entirely relevant to the state of mind of each character and to the stages of their relationship.

This was an emotional roller coaster of a book that moved me on every level.

Devon has created 2 amazing characters in Reese and Jay and they will stay with me for a long time.