Step by Step by K.C. Wells 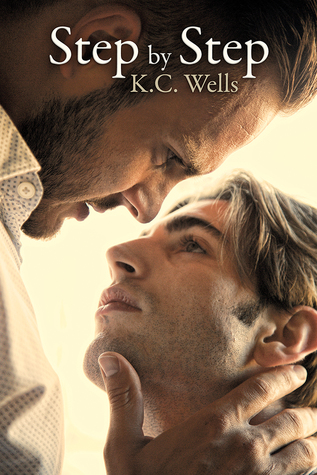 KC Wells is one of my ‘go to’ authors and I get really excited when she releases a new book. I didn’t even read the blurb for this one but got stuck in right away!

Jamie is struggling with his financial burden of paying for college. He works three jobs just to pay his rent and feed himself and then there’s the pressure from his parents who are immersed in their own messy divorce. One day in the library while he’s meant to be studying Jamie gets bad news and his world begins to crumble and it’s too overwhelming in that moment. Bearing witness to his meltdown is Guy. Guy is in his late thirties; he’s rich and while he has his own family challenges he can see that Jamie needs some help. Guy decides to pay it forward, drawing on his own experience in his time of need at the hands of his saviour Stephen who later became his lover. Sadly, six years have passed since Stephen’s death and Guy hasn’t been able to put it behind him properly but he sees something of himself in Jamie and he yearns to help him.

Jamie is naturally suspicious. He is a young straight boy and this older gay bear wants to feed him, house him and pay for his education? Something doesn’t add up, yet Jamie is so desperate that despite his initial hesitation, he agrees to go and live with Guy. At this point I must admit I was rolling my eyes a bit and wondering what on Earth KC was up to. Was this some kind of fairy tale? I was tempted to go back and read the blurb but I persevered because I sensed the story was going to blossom into something much more substantial than the ‘too good to be true’ scenario I was currently experiencing with the first couple of chapters.

Oh thank God I carried on. My instincts were gloriously correct and the remainder of the story was just wonderful.

I love Guy. I want a friend like Guy. I want my children to marry a man like Guy. He’s a big, muscly, care bear with a heart of gold and a hugely generous, compassionate and patient nature. He’s kind and considerate and sexy and there aren’t enough positive adjectives to describe him. All I can say is ‘lucky Jamie!’ An attraction develops and KC treats us with Guy and Jamie’s journey towards love and a happy ever after. Can it be with one another?

Of course this book was predictable – it was meant to be. It was a joyous read filled with hope and happiness and humour. Of course KC always adds in some angst to keep us on our toes and a little bit of a message to make sure we’re paying attention to real issues affecting the LGBTQ+ community on a daily basis, but it all fits within the story perfectly and is totally relevant and not at all preachy. The supporting characters are also great and I hope we get to hear their stories too.

I highly recommend this book to anyone who wants to read a true romance. Congratulations KC Wells on another fantastic book – this one left me with all the fab feels.