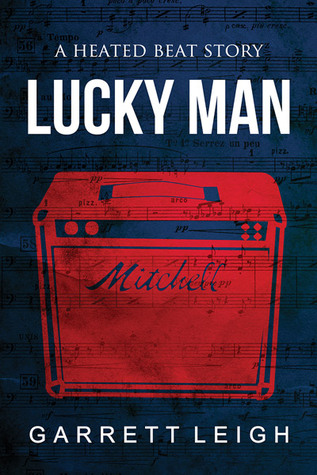 My Mate Jack by Garrett Leigh – 4 stars
Will and Jack are best friends. Jack is the hottest boy in school and has all the girls falling at his feet. Will is also cute but he always has a good excuse for not going with the girls and only Jack knows its because he’s gay. It makes no difference to Jack, and the boys spend all their free time together growing up. The plan after school is for Will to go to uni in Leeds and for Jack to take his DJ skills off to Ibiza, but before they go Jack very generously offers Will the opportunity to make out together so that he doesn’t go off to uni a virgin. Will has harboured feelings for Jack forever and so finds the entire experience mind blowing and not easy to shake off in the coming years. It seems Jack is living the high life and developing celebrity status in the club culture while Will is struggling to settle. Eventually the fates align to being them back into each other’s lives and Will discovers Jack is not the person he thought he was.
This was a gripping read with all the elements of a friends to lovers story. However, the path to happiness did not run smooth and the character’s lives were stricken with set backs, difficult relationships and many other challenges. Through it all, the friendship between Will and Jack is the thread of the book and it weaves its way through the pages producing and engaging and exciting storyline. The characters feel real and the situations vivid through the authors creative writing style. Garrett Leigh has written a great start to the series and I’m looking forward to the next book.

Lucky Man by Garrett Leigh – 4 stars
This is the follow up to My Mate Jack and I really enjoyed the references to Will and Jack throughout as it gives a greater insight to their developing relationship. Jack is now living in England and is playing drums in a band called The Lamps. The lead singer of the Lamps, Finn is his housemate, and this is Finn’s story.
The book opens at a gig and we meet Danny Jones who is a local DCI and pretty much still in the closet. Danny is mesmerised by Finn singing and playing guitar on stage and when he gets to meet him and have a few drinks afterwards, their fate is sealed. The attraction is mutual and Danny goes home with Finn and they spend an amazing night together. Danny however, is working to try and capture a serial killer and it takes up his time so much that he is forever leaving Finn high and dry. Finn has his own challenges with his constant battle to keep his mental health issues at bay because he thinks this will put Danny off. Each man struggles with his individual life challenges yet their desire for each other grows stronger and they fight for their chance to be with each other.
The storyline is more captivating than the first book because of the nature of Danny’s work and how that plays out. Finn is also the type of character you fall in love with instantly, flaws and all and consequently there is much angst to his story. If I was to say anything negative it would be that I felt the book could have been a bit longer because there was a lot of detail to cover and at times it felt too concise. This is kind of a backhanded compliment because ultimately I just wanted to read more…I hope that Garrett Leigh plans to write more books in this series because I’m sure Finn and Danny will pop up in them and I’d love to hear more about them.