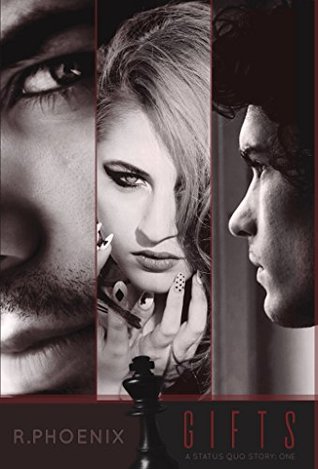 Here we return to the world created by this author where humans are now no more than slaves.

Vampires, witches and werewolves are at the top of the food chain.

Your ability and power determines what position you will hold.

Imri has power, no one would realise it but he can read minds.

As a lowly witch and a slave he tries to hide what he can hear but somehow it has come to the attention of one of the powerful witches.

Being given as a present to an elder vampire wasn't how he wanted his life to go, she had a reputation for killing those that displeased her without so much as a blink.

Draven was a witch with a problem....

He was in love with Callia, the elder vampire, but their love has to remain a secret for both their sakes.

Giving her Imri as a gift was a genius move on his part, not only for what he could find out for them but the fact that he was so pretty that they could share him in bed.

Imri finds himself being almost worshipped by the two of them and although scared, loves the relationship that starts to form between them all.

This book is a fantastic short that can be read as a standalone.

I think the way to describe it is seductive, sensuous and very alluring.

I loved the dynamic between the three characters and can't wait for more.